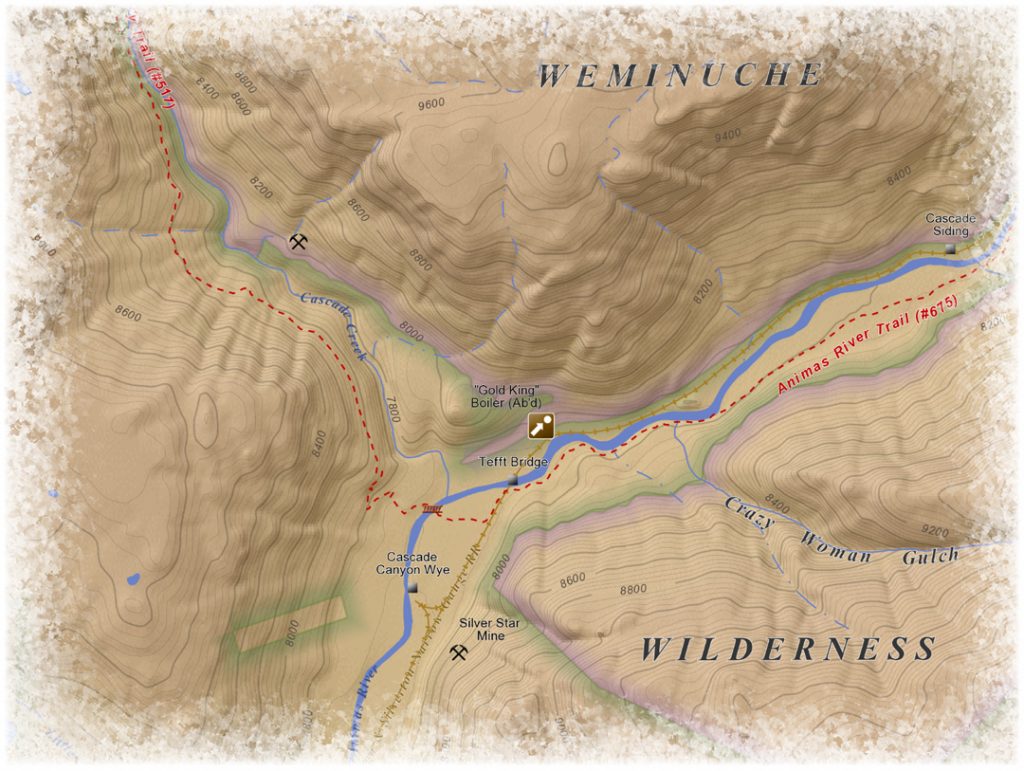 For those of you who are rail buffs, you may already know a bit about this feature, or at least, its function.  The Denver & Rio Grande Western Railway historically operated between Denver and Salt Lake City, with numerous spurs connecting to the various mining and lumber towns scattered across the Rockies.  Today, most of the original line has long been abandoned and removed.  One particularly popular stretch still in operation, however, is a 45-mile section run by the Durango & Silverton Narrow Gauge Railroad (D&SNG), which takes tourists between these two quintessentially western mountain towns and follows the scenic Animas River through steep, forested terrain.

Located approximately 26 miles north of Durango, the Cascade Canyon Wye was constructed in 1981 to provide the D&SNG a place to turn around during winter excursions when heavy snow pack prevents the train from proceeding all the way to Silverton.  In addition to the triangle-shaped track that allows the train to make a three-point turn and reverse direction, a structure has also been erected on the banks of the Animas that serves as a lunch area for winter passengers.

The next few miles of track north of Cascade Canyon Wye pass additional historic sites, such as the impressive steel Tefft Bridge built in 1887 (named for an early forest ranger Guy Tefft), and an abandoned boiler.  Per Robert T. Royem, author of America’s Railroad: The Official Guidebook, this wood and coal powered boiler came from Locomotive 32, the “Gold King” and was sacrificed by the side of the tracks in order to power a sawmill and other machinery used by the railroad company around 1910-1911.  A little farther up canyon, Cascade Siding (no longer in existence) was used by ranchers to load and transport livestock from the area.  A section house was also located here at one time, and the siding saw additional action as recently as January 2001, when the D&SNG assisted the Colorado Division of Wildlife in releasing a number of bighorn sheep into the surrounding Weminuche Wilderness.

To anyone planning a visit Southwest Colorado: be sure to check out Durango and ride this infamous train (think Butch Cassidy & the Sundance Kid).  You will revel in the natural beauty of the region and see plenty of local history come alive while on the rails!