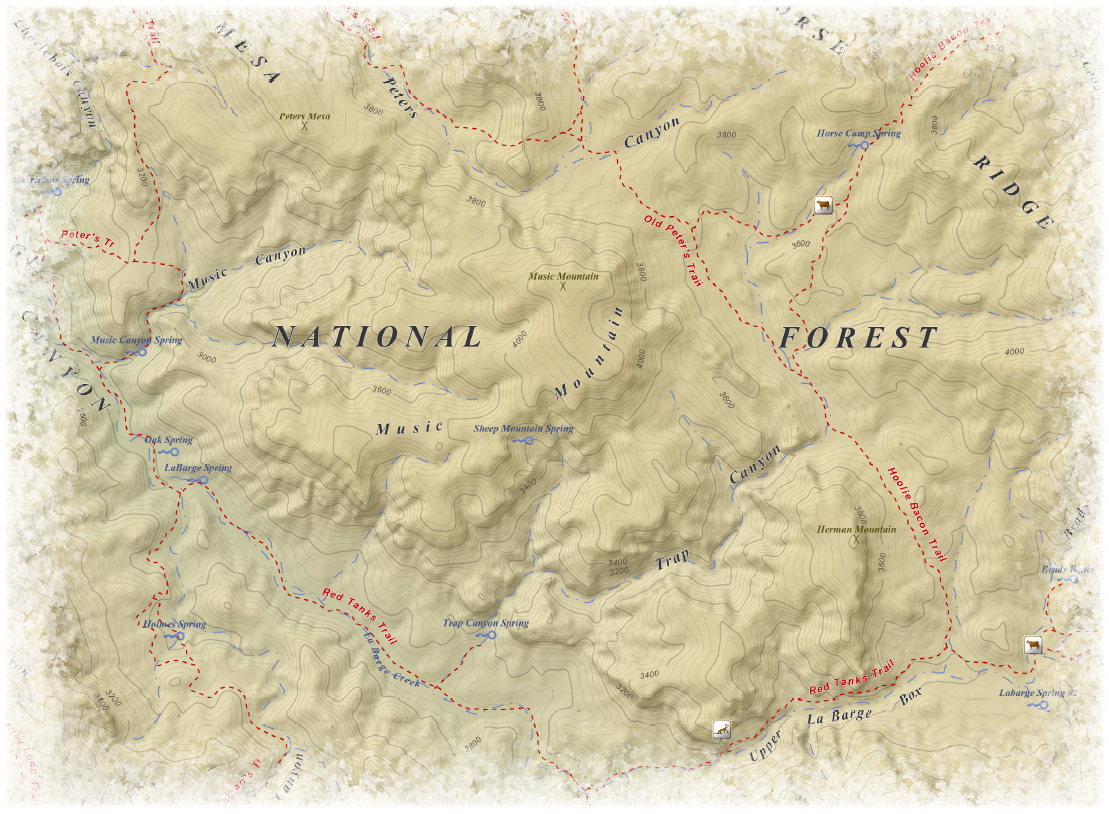 Having spent quite a bit of time hiking in the Superstition Wilderness, I’ve often wondered about the alluring name of this particular mountain, as well as nearby features, Music Canyon and Music Canyon Spring.  Located in the heart of the wilderness between the Red Tanks Trail on the west and Old Peter’s and Hoolie Bacon Trails to the east, Music Mountain is situated amongst some of the most spectacularly rugged yet beautiful Sonoran desert terrain.  Was the name’s inspiration some glorious turn-of-the-century orchestral work? Was it coined after listening to a particularly lovely babbling brook or native songbird?  Was a young Apache maiden overheard singing by a miner in search of treasure?  I assumed it was something joyous or romantic, but instead learned of a bit more mysterious and possibly even spooky origin.

After doing a little digging, I came across a great article written about Music Mountain by a local historian, Tom Kollenborn (January 2009).  In his article, he referenced an even earlier newspaper article that appeared in the Mesa Journal-Tribune back on August 13, 1928.  The article was the very first publication in which the name Music Mountain was recorded, and the name stuck.  The story goes something like this:

Ray Howland, a well-known “Lost Dutchman Goldmine” hunter and treasure seeker at the time, was the subject of the original Mesa Journal-Tribune article and described his discovery of “a musical mountain” while exploring the Superstitions.  Per Ray, “the air around Music Mountain is filled with a weird melodious sound that cannot be attributed to the wind whistling through the rocks because the sounds can be heard when the wind is not blowing at all.”

To quote Mr. Kollenborn, “Stories about how important Music Mountain is to Native Americans still circulate. The musical sounds that emanate from Music Canyon and its tributaries continue to produce stories about how sacred the area is to the Native Americans. Old timers talk about Apache burial grounds on Music Mountain and the haunting sounds of the dead. The Apaches and Yavapais gathered agave hearts on Peter’s Mesa just north of Music Mountain. Their roasting pits can still be found on Peter’s Mesa. Their activity in the area might well have warranted a burial site on a nearby mountain such as Music. Some years ago I was talking to an old friend, Phillip Cassadores, a traditional Apache medicine man on the San Carlos Reservation. He cautioned me not to be so sure these stories were not true. Ray Howland may have become involved with an unexplainable legend when he talked about the music and ghosts of Music Mountain.”

Other historians have claimed that the mountain was named for a local cattleman with the last name Music, but no documentation has ever been produced to support this theory.

Anyone who has ever hiked in the Superstitions can attest to the strange vibe that is sometimes felt within the wilderness.  Perhaps it is the depth and variety of lore and legend tied to the landscape.  Perhaps it the serene, yet edgy isolation one feels after hiking just a few miles in to such a rugged place.  Whatever the case, because the origin of Ray Howland’s name for the mountain remains somewhat mysterious to this day, it is a perfect fit for the mysterious and romantic place forever known as the Superstition Wilderness.